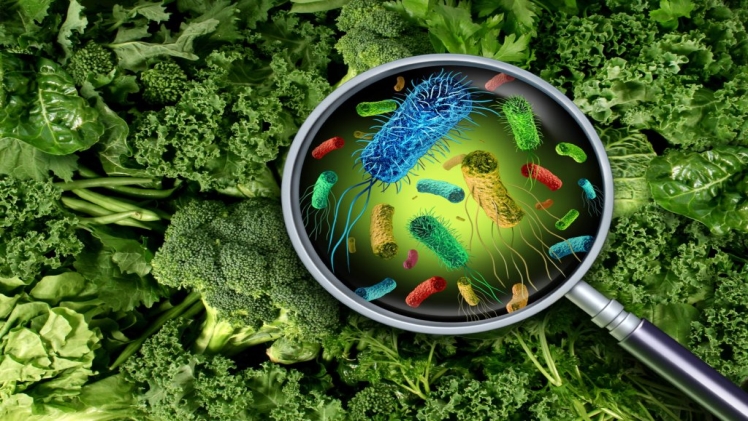 Bacteria In industrialized countries, and based on reports from those that have carried out comprehensive assessments of the number of illnesses, hospitalizations and deaths from contaminated foods, the most common causes of foodborne illness are norovirus, Salmonella enterica, Campylobacter spp., Clostridium perfringens and Staphylococcus aureus, (Scallan et al. 2011a, 2013; Adak et al. 2002; Hall and Kirk 2005). Due to its high case fatality rate, L. monocytogenes has also become a much noted cause for concern. Scallan et al.

(2011a) reported that norovirus was responsible for most (58%) foodborne illness in the US, while non-typhoidal Salmonella was the leading cause of hospitalizations and mortality. Collectively, Campylobacter spp., non-typhoidal salmonellae, Clostridium perfringens, L. monocytogenes and E. coli O157, norovirus and Toxoplasma gondii accounted for 90% of all domestically-acquired cases of foodborne illnesses, hospitalizations and deaths in the U.S. (Scallan et al. 2011a).

Attention has also been drawn to Cronobacter spp., possibly associated with powdered infant formulae and linked to fatalities and sequela in neonates. A relatively low proportion of illnesses have been traced back to particular foods. Where that has been possible, the common contributory factors are very similar in different countries. For example, inadequate thawing prior to cooking occurred on numerous occasions with large Christmas turkeys.

The subsequent cooking failed to kill salmonellae in the center of the partially thawed bird, resulting in salmonellosis. Inadequate temperature control after cooking includes preparation too far in advance of consumption; storing at warm ambient (non-refrigeration) temperatures; and attempting to cool large amounts of heated food that cannot be cooled quickly, resulting in growth of surviving bacteria during the slow cooling, and consumption without reheating above ca 63 °C to kill the vegetative cells of, e.g., Bacillus cereus in rice or Clostridium perfringens in meat or gravy. Contamination of a cooked, safe food with microorganisms from raw food is another important factor causing foodborne illness, e.g., at barbecues.

A great number of different foods and food ingredients have been implicated in outbreaks of salmonellosis. Frequent food vehicles for salmonellae include meat and poultry, eggs and egg products, milk and milk products, fresh produce and unpasteurized juices (de Roever 1998) as well as spices. In many countries, the occurrence of S. Enteritidis particularly in poultry and in eggs increased greatly from the mid-1980s to become a serious problem, but outbreaks linked to this pathogen declined in the UK from 1996–1997 (ACMSF 1993, 1996, 2001) and continued to decrease up to 2012 (PHE 2014).