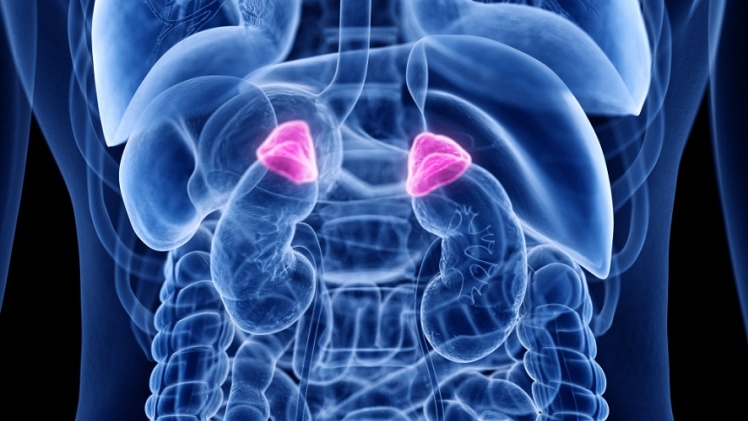 After receiving word of turmoil from the hypothalamus, the pituitary gland then secretes something c a l l e d adrenocorticotropic hormone (ACTH) into circulation. (Recall that hormones are long-range messengers, which differ from neurotransmitters, which act neuron-to-neuron.) Now in circulation, ACTH acts on the adrenal glands, which are perched above the kidneys. This causes a surge in cortisol and epinephrine. HPA Axis: Hypothalamus➛ Pituitary gland ➛ Adrenal glands Amygdala ➛ Hypothalamus (corticotropin-releasing hormone [CRH])

Pituitary gland (adrenocorticotropic hormone [ACTH])➛ Adrenal glands (Cortisol) ➛ Circulation The cortisol and adrenaline that are now coursing through your body have several effects on your physiology. For one, heart rate and blood pressure go way up. Pupils dilate. Salivary secretion halts and digestion slows down (digestion is a relatively labor-intensive process, and running from Mufasa is no time to be using precious resources on nutrient absorption). In fact, blood leaves the digestive area, rerouting to more important locations, like your muscles.

Blood sugar is released from the liver, and the parts of the body that are inessential to getting you out of harm’s way become resistant to insulin, making sure that your muscles can get all the glucose that they need. The immune system becomes suppressed, and blood itself becomes more viscous as platelets (the type of blood cells involved in clotting) begin to aggregate as a cautionary measure in case of blood loss. The odds of being chased by a lion are pretty slim these days.

If you’re lucky, true threats of a physical nature aren’t a common occurrence. But while our sources of stress have evolved, our response to them has not. So when you have an argument with a coworker, run to catch your subway only to be left on the platform as it screeches away, or get frightened by the air horn of an eighteen-wheeler as it lurches alongside you in traffic, the same domino effect begins in your body. When you have multiple stressful stimuli back to back, your body’s response can create serious problems.

This is why stress is such a vicious, indiscriminate killer—the chronic activation of this antiquated system, once lifesaving, now promotes inflammation, elevated blood sugar, insulin resistance, nutrient deficiencies, increased gut permeability, and more. But chronic stress plus carbs? That’s a recipe for disaster. At this point, it may not surprise you to know that as our waists grow, our brains shrink. 21 We’ve already covered many factors that might explain this startling observation, except one:

Chronically elevated cortisol due to stress. Ever see a person with a bulging midsection but surprisingly skinny arms and legs? This is the picture of chronic stress. It’s completely different from your run-ofthe-mill obesity, where everything—legs, arms, butt—is blown up to comparable proportions. This is because deep abdominal fat, the kind that wraps itself around your heart, liver, and other major organs, not only receives more blood but has four times more cortisol receptors than subcutaneous fat (the fat that you can “pinch” below the skin). 22 When cortisol is elevated, any carbohydrate intake will immediately promote fat storage, and most likely as the deep abdominal fat called visceral fat, which is the most dangerous and inflammatory kind of fat. This makes concentrated carbohydrate consumption uniquely damaging to a stressed-out person. (This is another reason why eating carbs first thing in the morning, when cortisol is naturally at its peak, is a bad idea.)

Advice for Securing Employment in the Oil and Gas Sector

Why To Do The VeChain Price Prediction In Trading?